Hell Yeah! – Extreme Road Trips That Make Yours Look Like a Ride to the Market

Sure jumping in your car – and loading up with a few buddies, some energy drinks, a half dozen bags of trail mix, and driving a few hours to the coast, or the mountains, or the lake – is a big summer road trip. But a few guys are on trips this summer that are making even your cross-country roll look like a soccer mom driving her kids to practice.

First up, meet Steve Shoppman and Steve Bouey. A couple of guys who figured just driving across the country was for pussies. So they decided to drive around the world. 60,000 miles around the world. In a pair of 4x4s provided by Toyota.

Starting in New Zealand last year, and aided by a crew of six, they’ve been on the road for one year and 127 days, logging over 44,000 miles on four continents and leaving tire tracks in over 25 countries. Right now they are attempting to drive north through the Congo, (definitely a windows up/doors locked neighborhood) while working out some visa problems. There’s money problems too. They’ll need to raise another $20-$30,000 in order to hit their target date later this year in New York City.

I don’t know what makes their trip more extreme: the grueling conditions and dangers they encountered. Or having the price of gas hit record highs right in the middle of it. You can chart their progress and check out photos and videos of the trip on their site, TheWorldByRoad.com. Then there’s Bill Bowles and Max Livingstone. Two guys in their late twenties with a serious Huck Finn complex. They decided to take their summer road trip not on an actual road, but on a river. And the river they chose is the Mississippi. The same Mississippi River that’s currently busting levees and flooding towns all along its banks. Like they say, timing is everything.

Starting in Minnesota three weeks ago in a pontoon boat named Evangeline they outfitted with a homemade shack on top – making it look like a floating frat house – the plan is to use the boat’s 10 hp motor to raft 1,800 miles down the Mighty Mississip’ to the Gulf of Mexico by the end of the summer. But with the floods, storms and tornadoes, it seems Mother Nature has other plans. They are currently stuck in Dubuque, Iowa until the river and weather settle down.

Once they can shove off again, Bowles and Livingstone will be partying with the people they meet in the big and small cities along the river. And filming it for the documentary they’re making. (Unless they become a news headline first.) They’ve got video clips of their trip up on their site, BigRiverShow.com. The shots of the flooding are insane and some of the interviews are off the charts on the Unintentional Comedy Scale. Huck and Tom would be proud.

[Hell Yeah! posts feature balls-out gear and high-adrenaline pursuits that fit in with Rev Theory’s single, “Hell Yeah”. You can read my posts and others at RevTheory.com/blog] 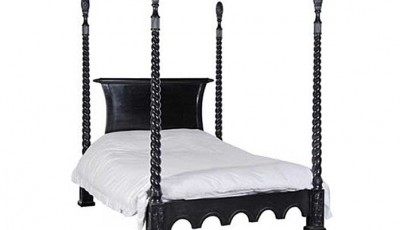