Professions: Yes You Can Be Male Nurse and Still Be a Real Man 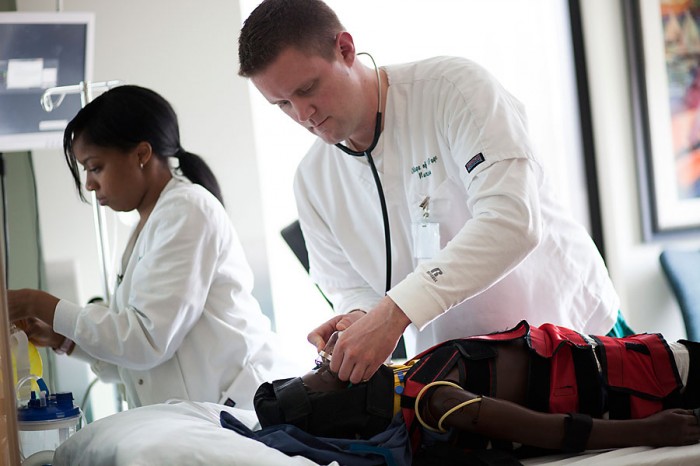 A while back I wrote an article about a man purse some company was putting out, and called it a “murse.” Apparently that’s also a derogatory term for male nurse, and guys in that profession came out and slammed me, and said even though they are nurses, they are still very much real men.

Believe me, I agree. Are you really going to call any of these guys feminine to their faces? Nope. Especially since one of them might end up being your nurse the next time you find yourself in the ER following a night of epic drinking. You want them to fix the damage, not cause more of it.

Finally, the traditional view of male nurses is changing, and it’s time to drop the stereotype of seeing men who go into nursing as feminine. Because they are not. At all.

My dad recently had orthopedic surgery, and the nurse who works directly with the top surgeon who did the operation was a man. An ex-athlete, this guy’s arms were the size of most guys’ legs. Nothing feminine about him.

And recent studies have shown that male nurses have a higher than average masculinity quotient (whatever that is). In fact, the American Journal of Men’s Health quoted one researcher who said, “The nursing profession is attracting males who hold a high degree of masculinity.” That’s right, the manliest of men are becoming nurses. Accept it.

So you want to be a nurse, help people, now what? Nursing schools vary from program to program. Some, like the nursing schools in Philadelphia, PA and other well-populated cities have online components, while others are done completely on campus. Many guys are pursuing a nursing degree or certificate while continuing to work at their current job. That means a lot of programs offer evening and weekend courses to accommodate your schedule. Due to downsizing and other economic factors, lots of guy are changing careers and finding their way into these flexible programs.

Trust me, it still takes a lot of courage for guys to enroll in a program that has been traditionally viewed as preparation for women’s work. Academia recognizes the ridiculousness of artificial segregation of duties, and it is past time we catch up with that brand of enlightenment. So go ahead, be a man and be a nurse.

Did Your Billion Dollar Bracket Get Busted? Here Are the Odds of Other Wins and Loses