Ever take dad out for a round of golf on Father’s Day? Yeah, nothing beats it… just you and him, a couple beers, chasing birdies on a peaceful summer day. Until dad starts cursing and throwing his outdated equipment. (And don’t even think about reminding him what he taught you about a good craftsman never blaming his tools. Trust me…)

Bring dad’s game up to par with the latest in golf gear. Next round’s on him…

GAME GOLF
Dad may be an old-school guy who likes to track his game with a stubby pencil on the back of a score card, but Game Golf (pictured above) can change all that, letting him keep tabs on his play using the latest tech. All dad has to do is clip the wearable sensor to his belt, pop some sensors into the top of each club’s grip, and all his performance data is synced to the cloud.

Now dad can use a dynamic interface check each of his shots and round data such as club selection, fairways hit, greens in regulation and distance, and a host of other stats—all from his computer or smartphone. He can even use Game Golf’s social media hub to share his round and virtually compete with buddies across the globe. The only questions is: What’s he gonna do with all those small pencils?
GameGolf.com
$249 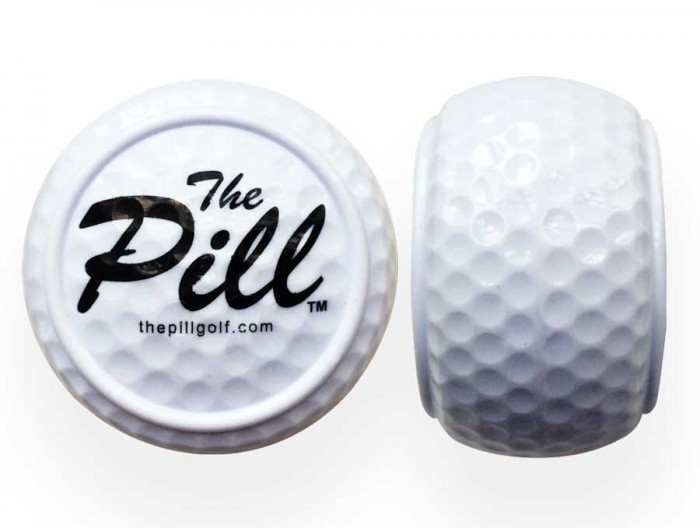 THE PILL
Here’s one of the slickest training aids I’ve seen come along in a long time: The Pill. It’s basically a modified golf ball that has its sides sliced off. No computer chips, no high tech displays. Just a ball that tells you instantly if you’re hitting it straight. There’s brilliance in its simplicity.

Give one to dad and he doesn’t have to use it just for putting practice—he can play The Pill from the tee all the way to the hole. A full swing will exaggerate a hook or slice, and chipping The Pill will let him know which way his clubface is facing at impact by the telltale wobble. The same way he knows how many beers you had on the course by your telltale wobble.
thepillgolf.com
$12.95 for the single Pill
$37.95 for the three-Pill pack and tote bag
Available at GolfGalaxy.com ASHWORTH ENCINITAS WINGTIP GOLF SHOES
Let dad do some styling on the course this year. Inspired by the traditional wingtips dad wears to the office, the lightweight Encinitas Wingtip golf shoes from Ashworth have an ultra-rich leather upper and a soft, full-length cushioned midsole. And with Ashworth’s flexible spikeless design, dad can wear them for business meetings on the course and off.
TaylormadeGolf.com
$200 ADI CLIMACHILL SHIRTS
Tell dad to keep his old golf shirts in the closet. Today’s golf apparel has more tech built into it than his first car.

The new climachill collection from adidas Golf (who don’t believe in capital letters), has new and exclusive fabric technologies designed to keep dad cool when temperatures (and tempers) rise on the course. Not only are the woven titanium fibers of climachill breathable and lightweight drawing heat away from the body, but they actually delivers a cooling sensation to the skin, and the shirts have strategically placed aluminum dots located inside the back neck, one of the warmest areas on the human body, to help add some extra cool to dad. It’s like wearing an air conditioner. Sort of.
Adidasgolf.com
$75-$80 SWINGBYTE 2
One thing’s for sure: Dad’s swing isn’t getting any better as he gets older. To keep him from turning into Charles Barkley on the course, give him a SwingByte 2.

The small, less-than-one-ounce sensor clips to any of dad’s clubs, just under the grip, and collects data on everything from club speed to tempo, and even gives dad a visual of his swing path. It sends everything wirelessly via Bluetooth to his smartphone or tablet so he can see for himself what you’ve been telling him all round. It’s like having a private swing coach for under $170. Who needs Hank Haney?
swingbyte.com
$169 TAYLORMADE MICROLITE STAND BAG
Give dad’s tired back a rest by getting him the lightest bag in TaylorMade’s stand bag lineup. Their MicroLite weighs in at a runway model-like 4.5 lbs, and comes with a 4-point shoulder strap and EVA ergonomically molded hip pad to cushion the carry during a long walking round.

A 4-way top and six-pocket system keeps his clubs in order, and the unique square-top design will let dad easily remove and return his clubs without tangling. Even the bent ones he wrapped around a tree.
TaylorMadeGolf.com
$159.99